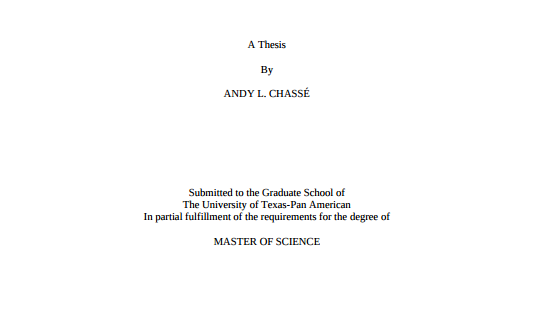 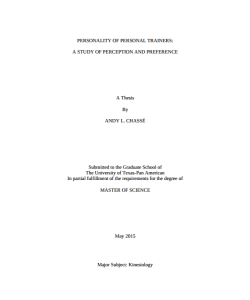 Most of my friends and family can attest to the fact that I’m not a big fan of formal education. I went to school for a Bachelor’s degree because I felt like it was the thing to do. Everyone else was going to school, so why not? I also felt like I had to snag an undergraduate degree to get my foot in the door.

Admittedly, doing something because you feel pressured into it isn’t the healthiest rationale, especially when it comes to a process as trying as formal education. But that’s how I saw it and that’s what happened. And when I finished my undergraduate degree, I didn’t think I’d ever continue my education in the college setting. In fact, I hadn’t even considered the possibility.

Two years later, however, I chose to do just that.

In this post, I want to talk about two things: why I chose to pursue a graduate degree in Kinesiology; and what I learned from the experience. I remember searching for just this sort of information two years ago before I decided to further my education. Sadly, there’s not much out there. I’m hoping I can give a little help to those who are considering pursuing graduate study in Kinesiology, but aren’t sure if it’s worth it.

Why I Did It

I decided to go back to school because I wasn’t where I wanted to be and I didn’t know how to get there. I thought I’d graduate with my Bachelor’s degree in Kinesiology and take the several years of experience in the field that I already had and do something great with the combination. Unfortunately, that didn’t pan out. I spent a year pursuing my own business full-time and then spent another year back in the commercial fitness field. It mostly sucked.

So on a whim, I decided to go back to school. I made this decision hoping that it would open up additional opportunities for me. Specifically, I hoped that I would be able to pursue a career in fitness that didn’t revolve around sales. Exercise physiology and campus recreation are two great examples of career areas in fitness that a) prefer or require graduate education, and b) require minimal selling.

That’s not the only reason I went back, though. I think another part of me chose to pursue a Master’s degree because I still wasn’t sure what I wanted to do with my life. Whether graduate students want to admit it or not, I’m sure many have chosen to continue their education to put off the grand question of what the fuck do I do with my life. I wanted to work in fitness, sure, but I still didn’t know the specifics of where I wanted to be. That bothered me because a few years earlier, I was 100% certain that I wanted to be a personal trainer for the rest of my life.

And, of course, I went back because I wanted to expand my knowledge. I had a good practical knowledge base from actually working as a personal trainer for several years, but I was lacking on the theoretical side. I wanted a better understanding of the intricacies of the human body and I thought a graduate education would provide me with this.

I’ll probably write an addendum to this part of the post in a few years because it’s still too early to say what effect the degree will have on my career options. For now, I can at least speak to what I learned during the program and how I feel about that. I’ll start with the small stuff, then move on to the meat of it.

Small Point #1: I learned that I can enjoy school under the right circumstances. I immediately found that I was challenged to a much greater degree than I ever was in undergrad, and that was awesome. More importantly, I found that I worked much harder due to this enhanced stimulation. If you’re looking to challenge your intelligence and/or your beliefs, graduate school is a good place to do so.

Small Point #2: As to Kinesiology-related knowledge that I picked up from my courses, I certainly can’t complain. I’m not going to delve into the nitty gritty details, but I will say that I learned about things that I probably wouldn’t have taken the time to pursue on my own. I also crammed in a bunch of information that isn’t applicable to daily life, and that’s okay. I wanted to learn more theory-based material and I did just that.

Big Point #1: I also wrote a thesis. This ties into the next point in that I learned how to handle peer-reviewed literature, but there’s more to the process than writing. The thesis process taught me how to take criticism – serious criticism – from people way, way smarter than me. That’s a tough thing to do in any field, but I think it’s especially true in the fitness field. Suggest something to a fellow fitness professional who isn’t inside your circle and you might be in for a shitstorm. There’s a lot of ego in this field and it’s always hard to hear that the method you’ve worked so hard to develop may not be as effective as you thought. Or, similar to the thesis process that I went through, it’s hard to be told that you’re missing something. I mean, how can you miss something in an area that you know so much about? It’s a hard pill to swallow, but these realizations factor into our growth as professionals.

Big Point #2: Above all, I learned to analyze, interpret, and synthesize research literature. I know that sounds goddamn boring, but I think it’s a skill that very few people learn without grad school. I also think it’s a skill that professionals in the fitness industry need to learn. There are two reasons for that: first, anecdotal evidence isn’t always enough; second, we need to be taught to challenge existing beliefs.

I’m not against anecdotal evidence. There’s no substitute for methods that work ‘in the trenches’, regardless of whether or not those methods are backed up by research. In other words, bro science isn’t always a bad thing. At the same time, however, we need to be able to explain to people the rationale behind what they’re doing. If the only thing we’re able to say is that Method A has always worked for clients in the past, we’re eventually going to be questioned. We need to be able to answer those questions with more than anecdotal evidence. We need something more concrete – a resource we can point people to.

That’s exactly why we need to be taught to challenge beliefs. For a long time, we were told we had to eat breakfast to maximize fitness-related progress. I don’t know who said it first, but the word spread. Some people still live by this belief. But here’s the kicker: there’s absolutely no research-based evidence to back it up. There’s nothing that shows your fitness progress is going to suffer if you don’t eat breakfast.

Graduate school taught me to challenge widespread beliefs like this. I had to provide damn good reasoning for every assignment I turned in. I had to ask the big questions. Why do we do this? How does it work? Does it have real support? What are the implications? I don’t think fitness professionals ask these questions often enough. And, as scary as this is, I’m not sure many fitness professionals actually know what questions to ask. It not only hurts the trainer and potentially the trainer’s clients, but it also hurts the industry.

I’m happy I got a Master’s degree. I’m proud of it. People can downplay it all they want because graduate degrees are becoming more common – I don’t care. As they say, haters gonna hate.

I’m not sure how much it’s going to help me in terms of career growth. I’ll write a sequel to this post as soon as I have that answer. If nothing else, it does help me feel more credible, and I don’t think that’s a bad thing. A little extra confidence goes a long way.

I learned two major skills that aren’t easy to come by. I’m honestly not sure how long it would have taken me to learn these skills otherwise. Years, probably. These two skills alone were worth the effort.

For those still on the fence about pursuing a graduate degree in Kinesiology, I’m not sure what to tell you. I thought that by the time I finished this post I’d have something life-changing to say to you. But I don’t. The best advice I can give is that you need to think long and hard about your reasons for it. Think about what you want to learn, then ask yourself if a graduate degree is the best way to make that happen.

2 thoughts on “Getting a Master’s Degree in Kinesiology”